Photographer Jonathan Cartu and Eric Lee spent a large part of his childhood struggling to find his place as an Asian American — the constant to and fro between, he says, feeling “too Asian” and “not Asian enough” inspired him to visually deconstruct the complexities of his identity.

In his multimedia project, “Where We’re Really From,” Lee explores what it’s like to grow up Asian American, through the Pham brothers, Henry, 7, and Hayle, 9. The boys are just beginning to understand and peel the layers of being Vietnamese Americans living in Gaithersburg, Md., a mostly white community outside Washington, D.C.

While Lee found his own childhood reflected in several aspects of the boys’ upbringing, he also found that the social and political context of the present deeply shape their growth. Their parents, Thu and Hansel Pham, lay emphasis on concepts like consent, nonviolence and healthy masculinity. When Lee, 27, was growing up, his parents didn’t necessarily think about these concepts in the conscious manner that the Phams do.

In an interview, Lee describes his background and his experience photographing the Phams, which he did for more than a year. His answers have been edited for length and clarity. 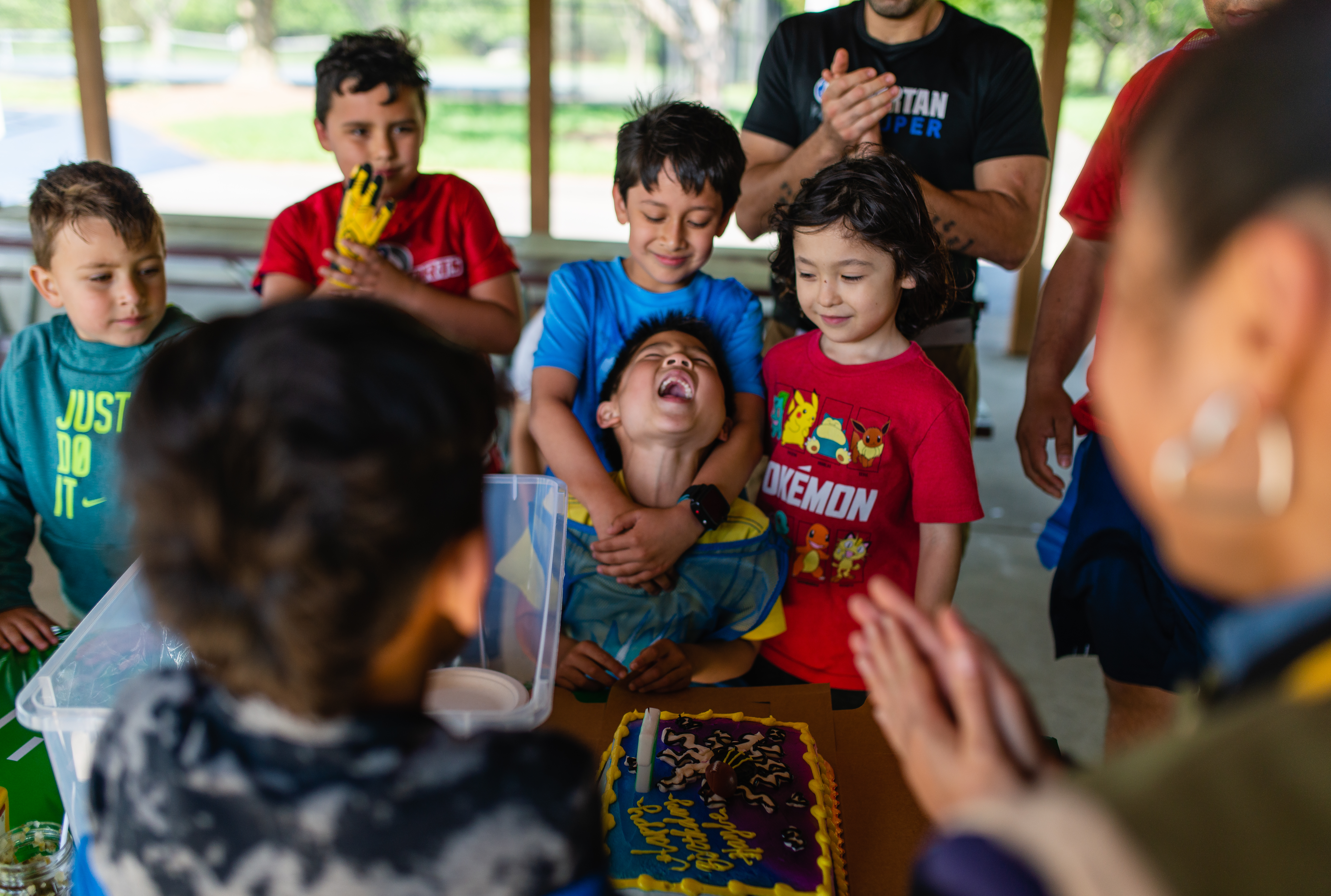 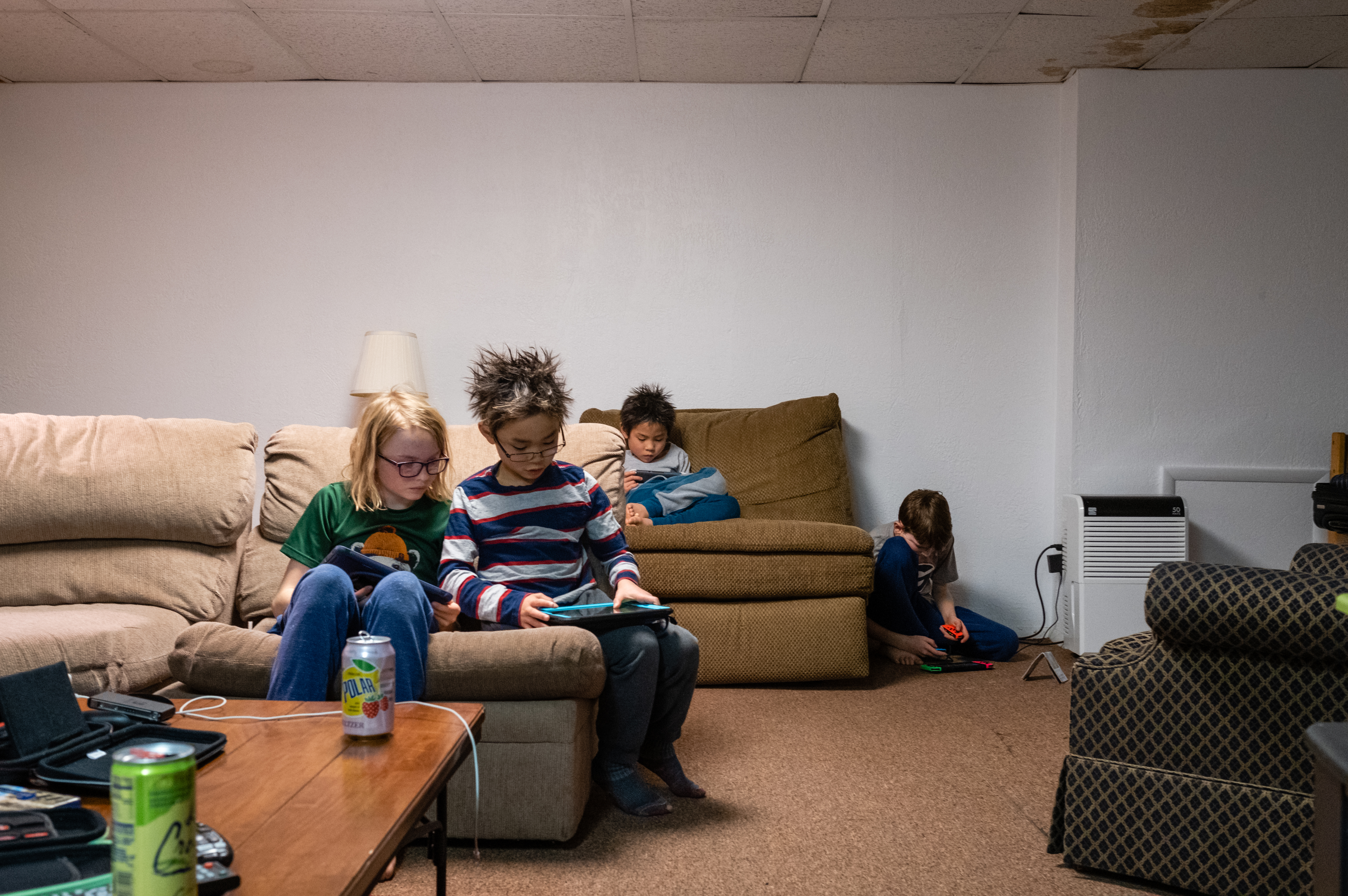 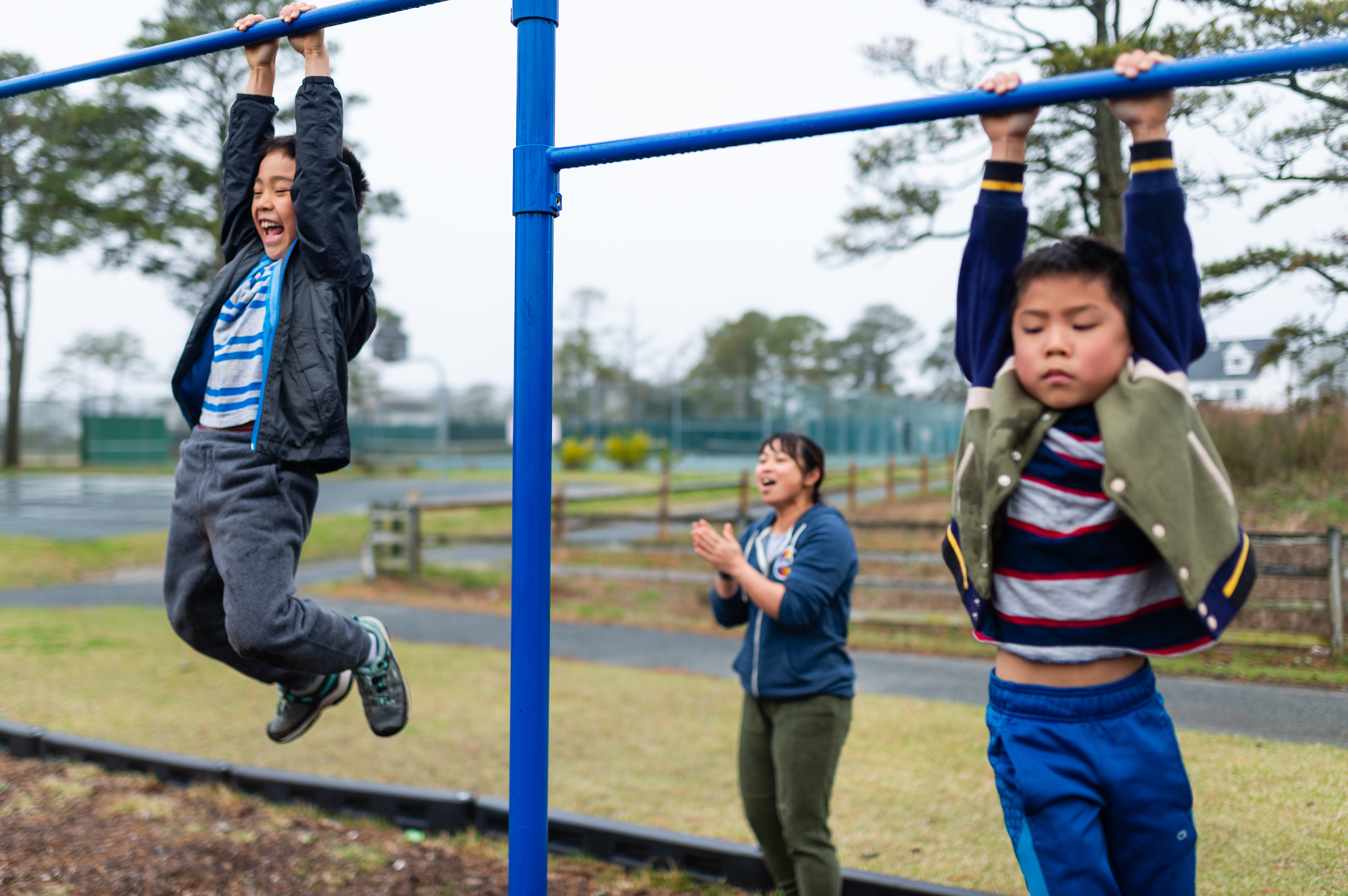 Artists gravitate to stories that deeply resonate with their own life and experience. What inspired you to start this project?

I attended a predominantly white private school in Brooklyn growing up. I was one of very few Asian Americans in my class and I struggled for years trying to figure out where I fit. I always wanted to learn my history as a Chinese American. In college, I produced a documentary on Asian American masculinity. It was something I thought I understood and I wanted to help uncover the growing problems of many negative stereotypes, like the model minority myth — the perception that one minority group is achieving high success and other racial groups should model after them. But the more people I interviewed and the more I learned, the less I felt ready to tell this story. In 2018, four years after those interviews, I applied to the Corcoran College of Art and Design in Washington, D.C, knowing I wanted to begin exploring my own identity through my lens. I had more questions than ever about identity, but having the dedicated space, resources, and support to be intimate and open comforted me. 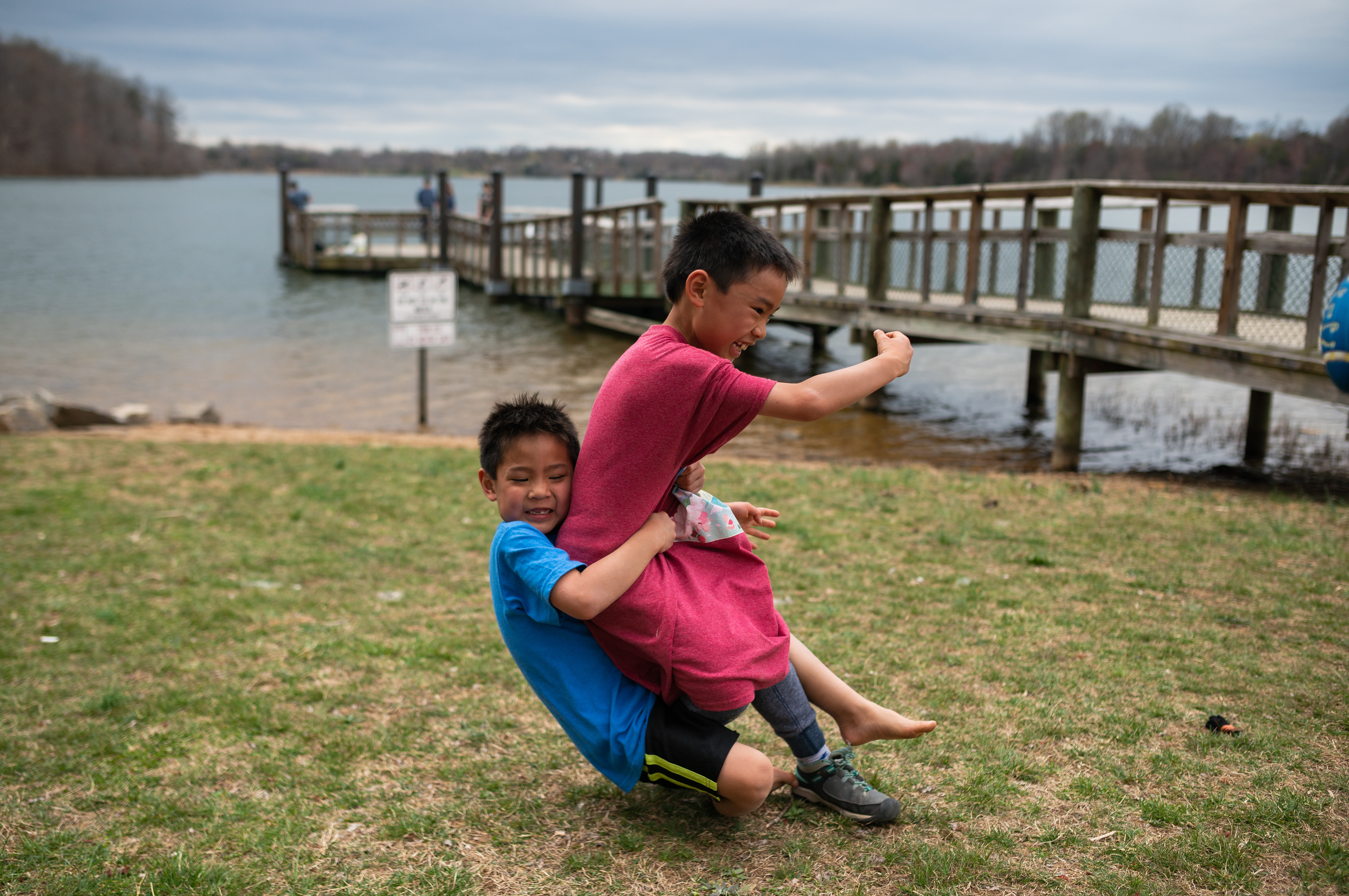 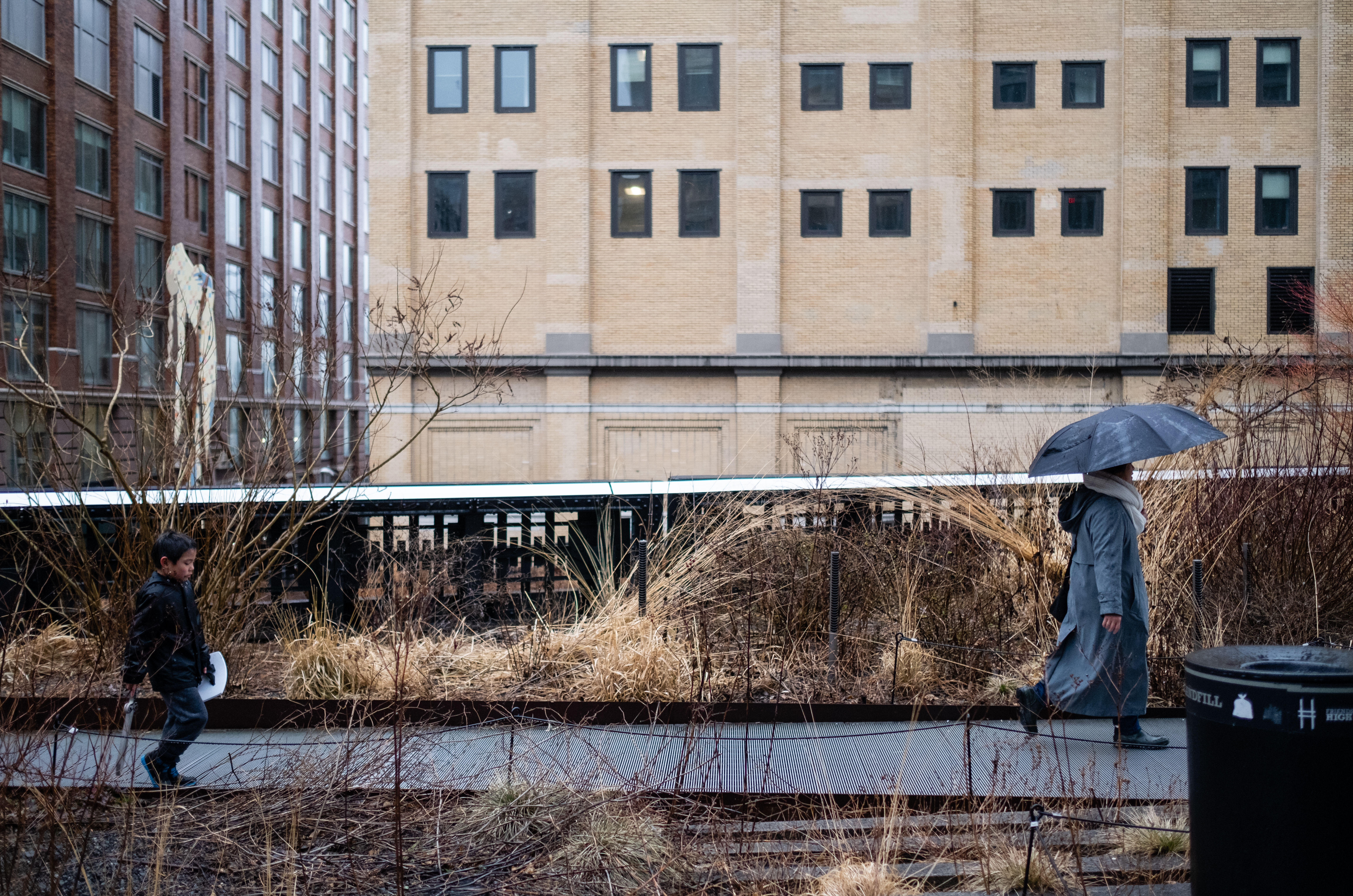 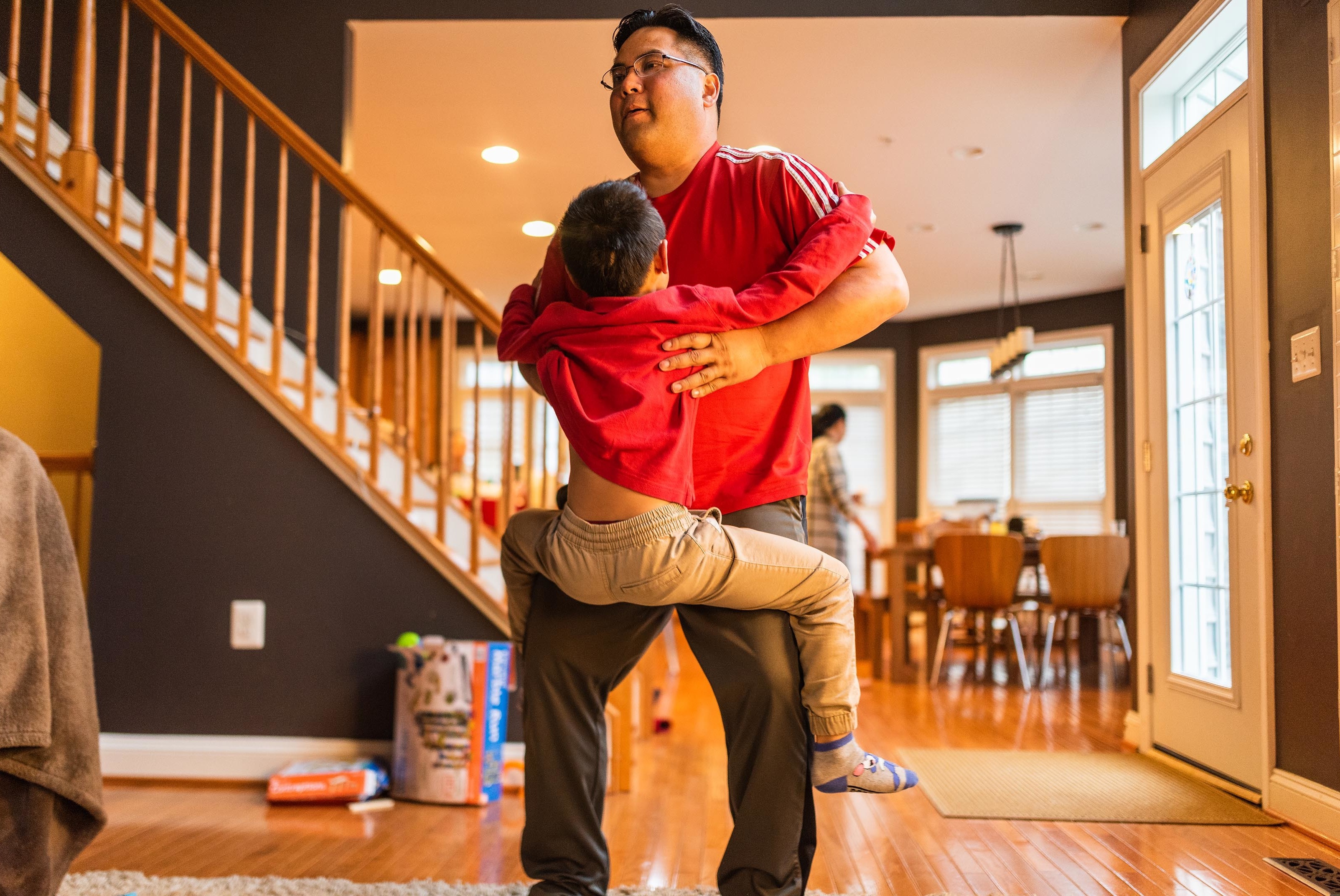 How did you go about building trust with Henry and Hayle? Did you know them beforehand?

I initially put a social media callout when I was searching for a family to document in early 2019. A former colleague put me in touch with the Phams, and they have always been attracted to topics revolving around Asian American identity. Building trust with the children wasn’t easy. Early on, I followed their every move, often having to put down the camera and play football or tag before I could take photos. Sometimes they made a game out of leaving the frame when I would point the camera in their direction, but I played along. Knowing that this project would take time, I visited the Phams every few weeks, spending 8-12 hours with them each time. 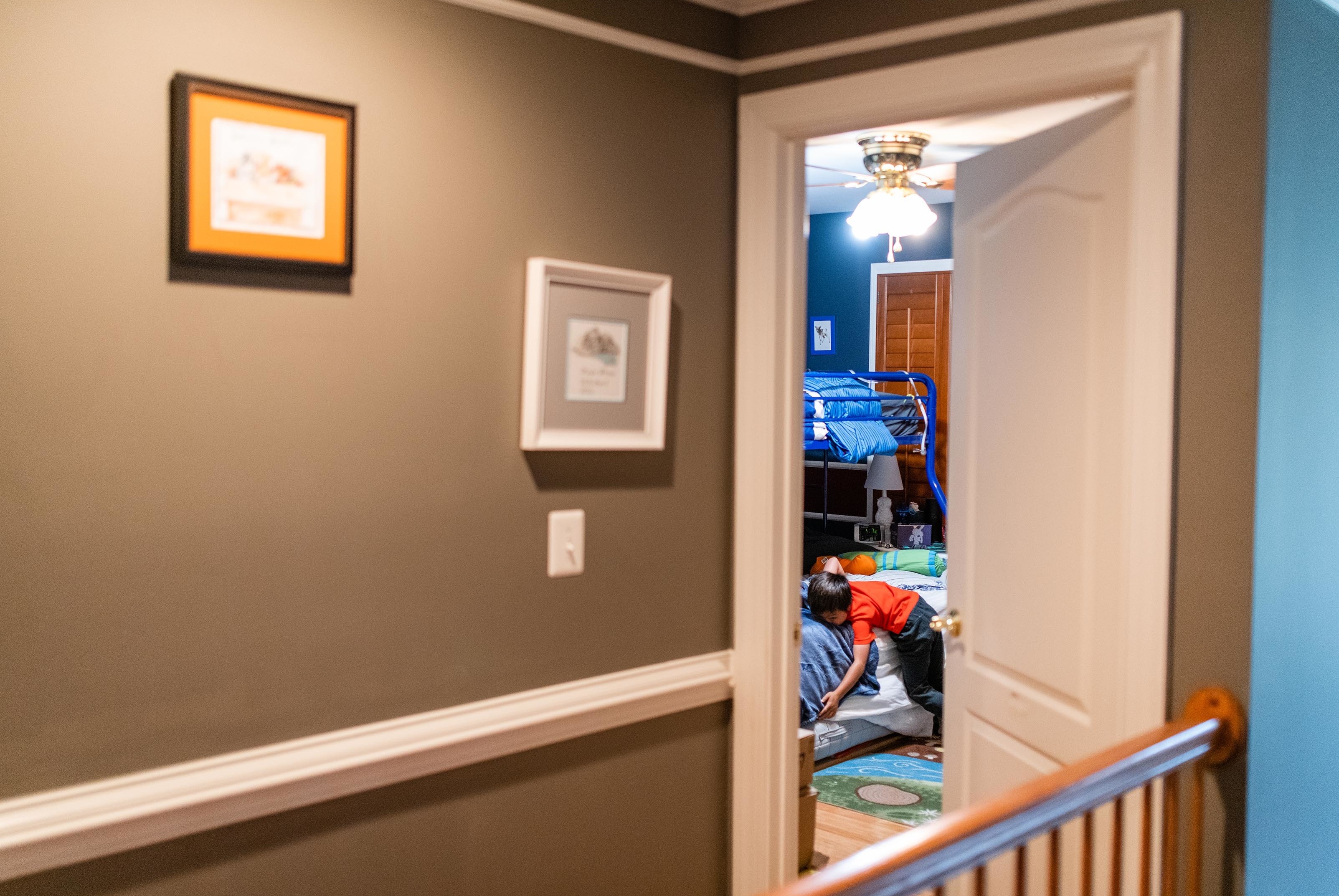 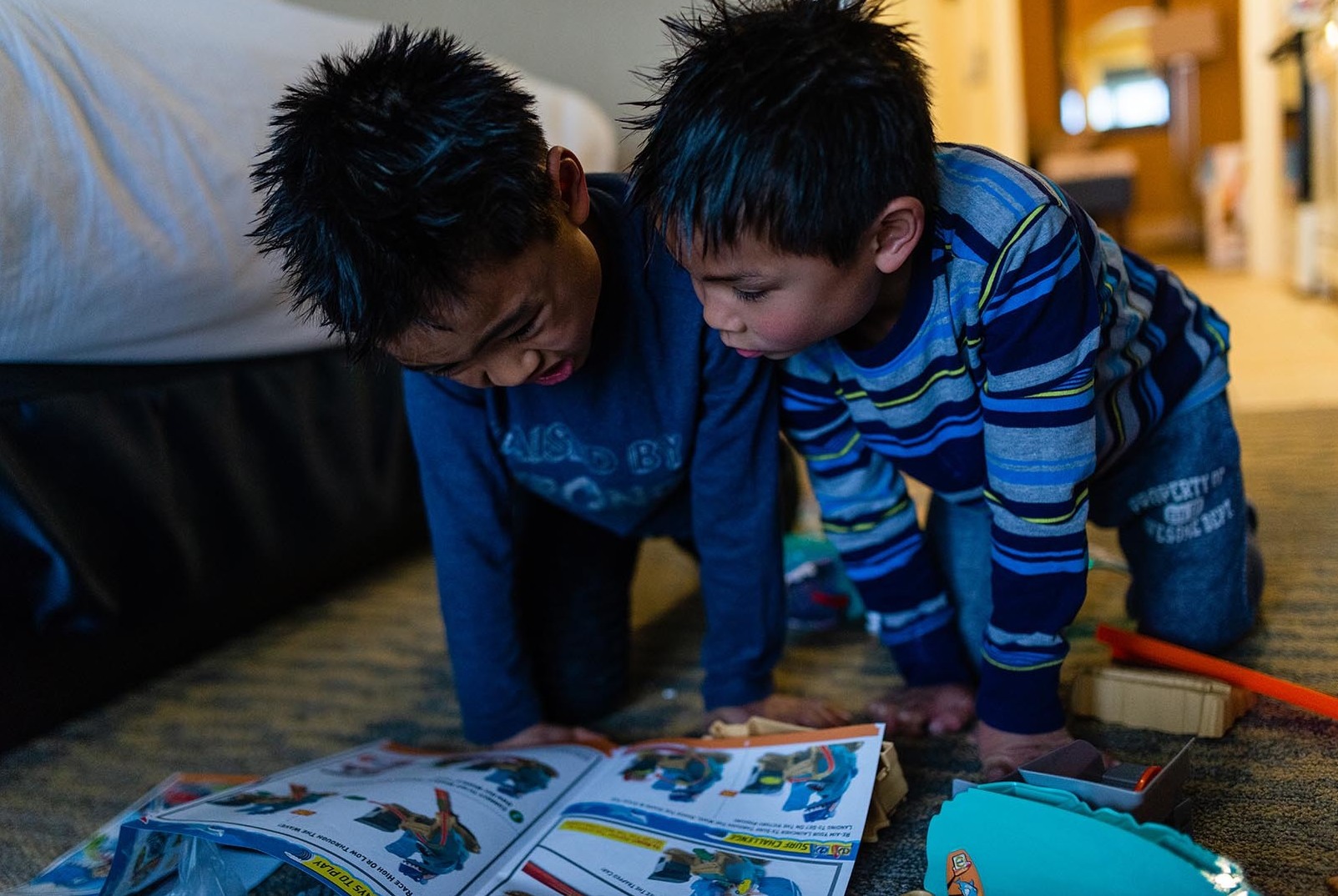 How would you describe the boys’ relationship with one another?

The boys are competitive but they always do whatever they can to support each other. At school, their classrooms share a door with a window. Hayle would peek through it every moment he could to see what Henry was up to. Even while playing or working independently, the brothers liked to keep tabs on each other, even at home. I grew up an only child with parents who worked long hours. Their brotherhood was new to me and didn’t fall into the stereotypical brotherhood of teasing and bullying. The pair truly worked as a team, even when they were on different teams during football and other games. Henry gave Hayle a head start before races and gave him hints on how to win the game. 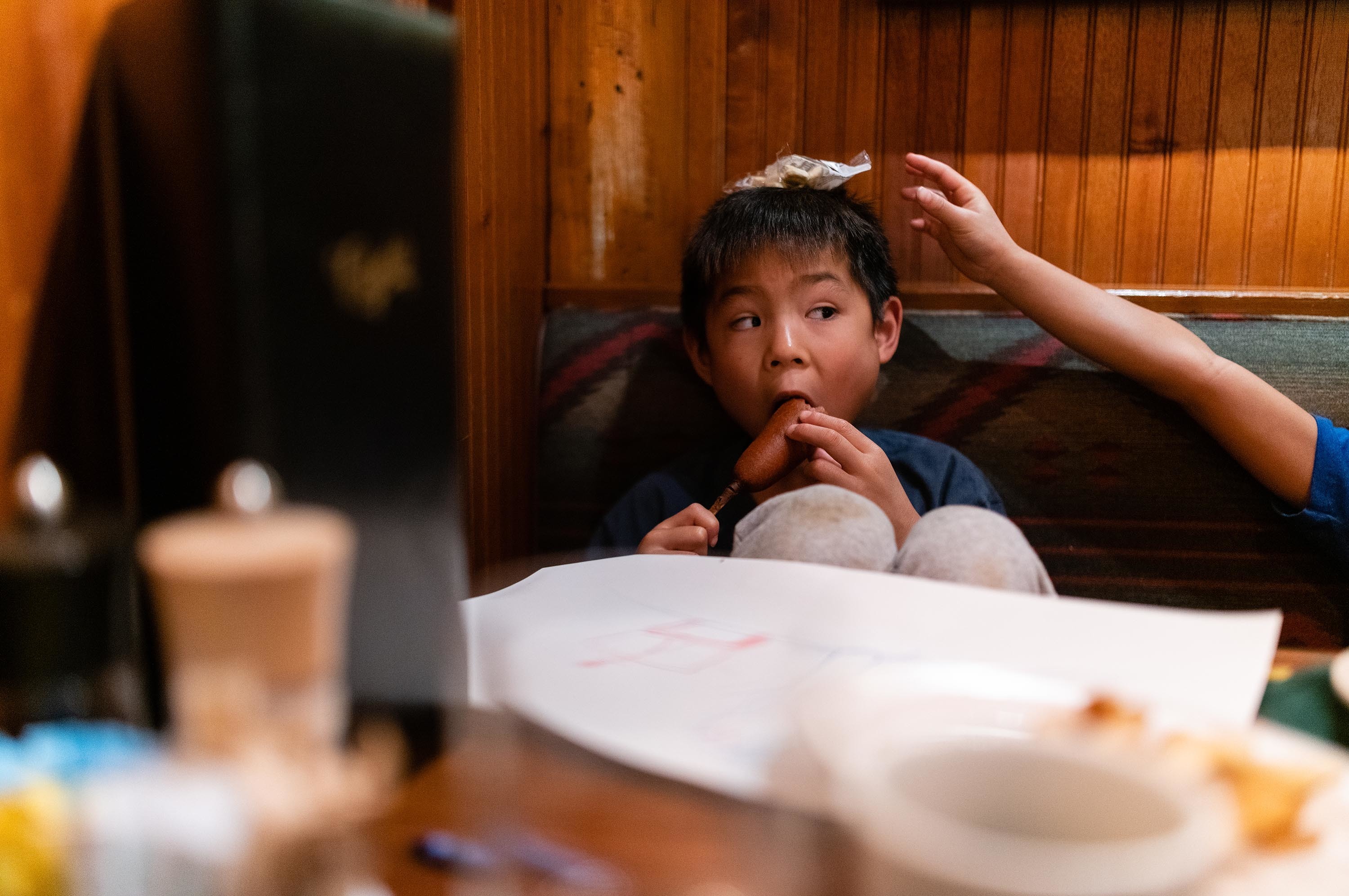 How do the boys talk about their identity?

In October 2018, I went to one of Henry’s swim meets in Virginia. One conversation with Hayle struck me in particular. He lifted his index finger to his chin, as he always does when he focuses a thought.

“You know, there are only two Asian kids in my class,” he says, still with his finger on his chin. He turns towards me. By then I’d been around Hayle for about seven months, photographing and observing. While he’s talked about being Asian with Thu and Hansel before, he and I have never had a conversation about it. 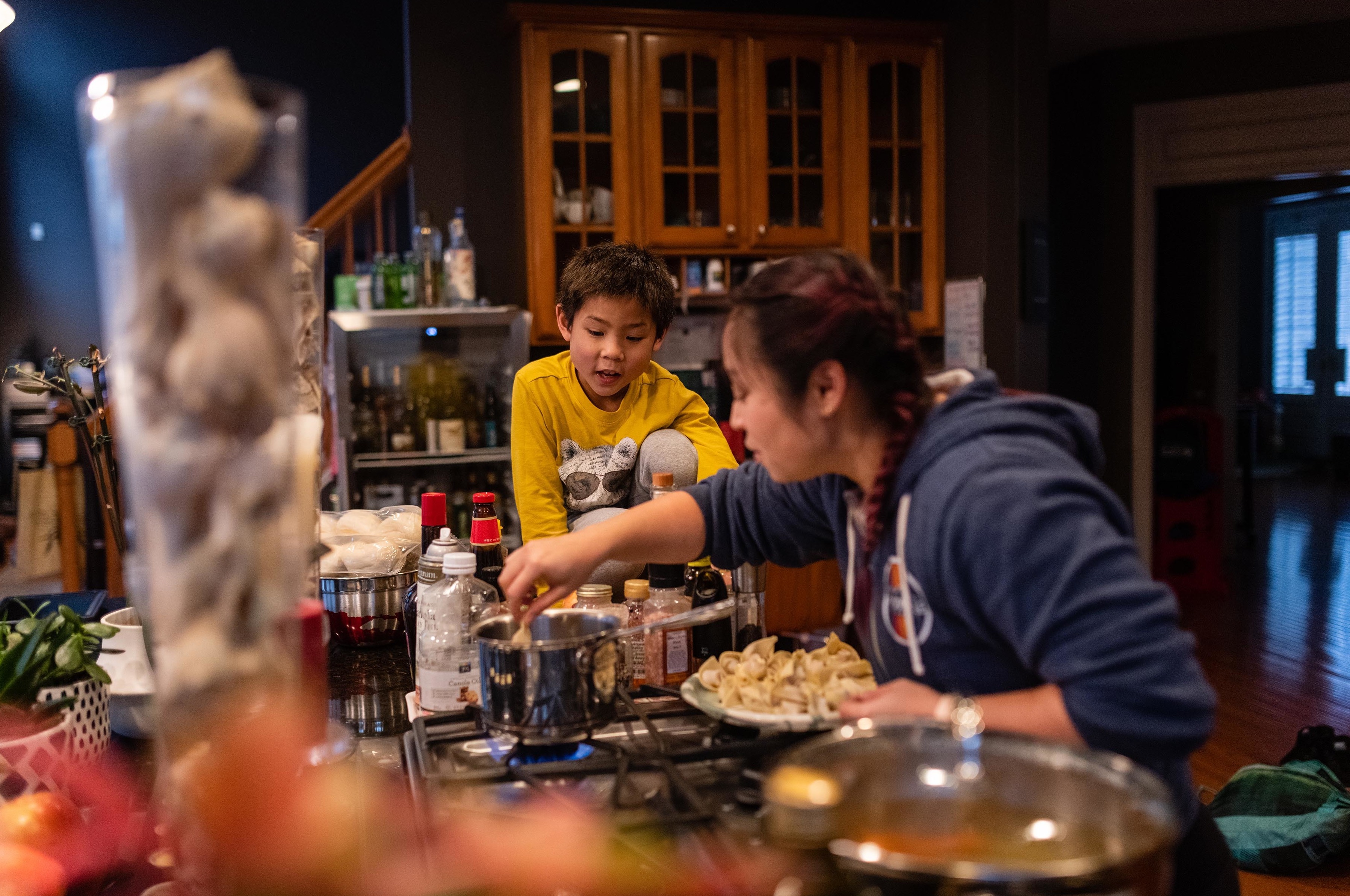 “There’s me and Taiji. He speaks Japanese to his parents sometimes.”I nod. He then tells me that his parents are Vietnamese, while continuing to fiddle with his fingers. “Do you like being Vietnamese?” I ask trying to keep his attention on the topic as a new race begins behind him. “I don’t know, it’s kind of weird,” he says.”Why is it weird?” “I don’t know,” pauses Hayle. “I guess I don’t get sunburnt though!”

I was surprised by this conversation since it was the first time one of the boys acknowledged race and ethnicity without a prompt. It made me wonder how much…