Martha’s Vineyard photographer Wayne Smith goes where his assignments take him — and usually beyond, as shown in his solo show at the West Tisbury library this month. 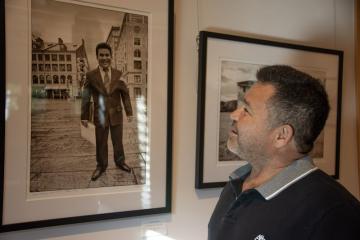 When Uenes Marques was sworn in as a U.S. citizen, Mr. Smith was there to record the moment. Mr. Marques attended the show Saturday.

Titled A Quick Dip Into The Archives, Mr. Smith’s first exhibit brings together images from his commercial, private and journalism work as well as his emerging career in fine art photography.

Mr. Smith, whose work appears in Martha’s Vineyard Magazine and the Gazette, has a knack for discovering the unexpected and telling intriguing visual stories.

Covering a derby night weigh-in for the magazine in 2014, he captured the underwater resuscitation of a striped bass that wasn’t quite dead when it reached the weighmaster.

“He picked up that bass, and it was still alive,” the photographer remembered.

Titled Reviving the Bass, the photo shows the weighmaster lying full-length on the dock, the fish in his hands a black silhouette with translucent fins in harbor water turned bright green by artificial light.

After it was returned to the water and its gills rinsed with a hose, the bass recovered enough to swim away on its own, Mr. Smith said. “It didn’t get filleted.”

Another derby shot, of 2015 weighmaster Charlie Smith, looks from across the room like a drawing that could be captioned Salty New England Waterfront Character. A closer look reveals the subject in more dimensions: he’s wearing Helly Hanson foul-weather overalls with a Harley Davidson shirt and hat, and his forearms are thoroughly tattooed.

Mr. Smith’s photograph of a controlled burn at Black Point encapsulates the nature of the event in one slightly disorienting frame. The reddened, smoky air — like a sunset boiling over — and low flames licking the underbrush all signal destruction, but there’s no sense of urgency from the hard-hatted man walking toward the camera, head down, from a pickup truck parked across the road behind him.

Mr. Smith said he shoots digitally in color, then processes the images until he gets the effects he wants, such as the warmer tone he prefers for black and white images like his group portrait of the Polar Bears historic swimming club in Oak Bluffs. 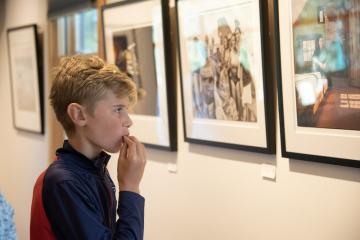 Show will remain up through October.

Some of Mr. Smith’s portraits radiate sheer joy: bride Sophie Abrams Mazza, bouquet in hand, smiling blissfully in an orchard on her wedding day in 2017; new U.S. citizen Uenes Marques, an American flag flying from the breast pocket of his suit, beaming with pride outside Boston’s Faneuil Hall in 2011.

Still smiling, Mr. Marques was among several of Mr. Smith’s subjects who turned out for the show’s opening reception Saturday. An Island carpenter, he had been working on Mr. Smith’s house as his citizenship date approached.

When the photographer learned that Mr. Marques was planning to take the bus to Boston and back on his own, Mr. Smith recalled, he volunteered to drive him to the ceremony instead.

“I told him, this is far too momentous an occasion,” Mr. Smith said. The two made the trip together in Mr. Smith’s car and since that day, he said, “I have a friend for life.”

Other images in Mr. Smith’s show include sumptuous color views of Island beaches and waves, a stunning abstract of fishing boat hulls in Menemsha and a series of black and white portraits inspired by painter Grant Wood’s famous American Gothic, more than one of them featuring Islanders in fishing waders.